Evolution works with populations. Individuals are irrelevant (unless there crops up a group of individuals who release a game-changer such as self-replicating nano-bots, a sustainable black-hole released into the earths core, fantasy of that ilk). That Darwinian fact is repeatable – evolution deals with populations, not with whatever group is caught up in surges of silliness over religious affiliation or geographic origin.

The actions of bible thumpers, or Islamic fundamentalists, or any of the multitudes of ideologically blinkered groups we as a race throw up will in the long run be as relevant to humanity as the long-forgotten disputes and ideologies of the builders of Stonehenge are to us today. The idiocy of any group of people who put faith ahead of knowledge and understanding is an unpleasant and inescapable idiosyncrasy of humanity. This idiocy is not anything we can solve though debate or rational interaction. All we can do is try to survive it. Be the ones that reproduce successfully. Do not be among those who slaughter each other in bloody, bizarre disagreements about doctrine and faith.

It is a given that you have to program religion and control the minds of people who are thusly programmed. Scientific knowledge can be independently verified and tested, questioned and requestioned. Religion cannot stand up to such testing. Which means that eventually the beliefs will fade away and be forgotten, replaced, evolution of beliefs that leave obscure fossils (Stonehenge is one such fossil) behind. The Louisiana Creationists will pollute minds for a few generations but eventually that story-book crap they peddle will wash out of the belief system, to be replaced with another upwelling of religious froufraw. The verifiable, testable, readily repeated scientific knowledge that is for now being denied by some citizens of Louisiana will not go away. Which makes me smile, actually. Evolution in action. 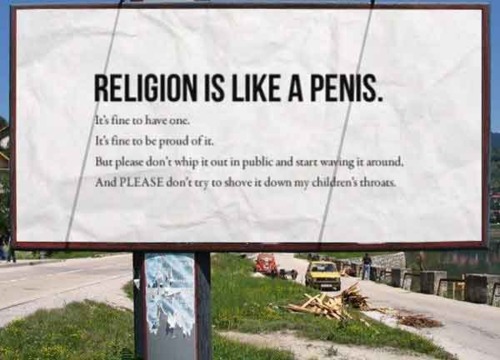 I read an article in a forum  and it pulled my trigger, so to speak (the article – http://blog.sfgate.com/hottopics/2012/06/25/in-louisiana-schools-‘nessie’-is-real-evolution-is-myth/)

“In Louisiana schools, ‘Nessie’ is real, evolution is myth

Some private Christian schools in Louisiana next year will be teaching that the Loch Ness monster is real.

It’s all an attempt by religious teachers to disprove Charles Darwin’s theory of evolution, The Scotsman reports on its website.

Thousands of students across the state are eligible to receive publicly funded vouchers to allow them to attend private Christian schools where textbooks published by Accelerated Christian Education (ACE) claim the monster was actually a dinosaur that existed at the same time as man, an assertion which conflicts with the theory of evolution.

Critics, The Scotsman points out, have slammed the religious textbooks as “bizarre.”

A former ACE student, Jonny Scaramanga, 27, now campaigns against Christian fundamentalism. He tells The Scotsman that the Nessie claim was presented as “evidence” that evolution could not have happened.

“The reason for that is they’re saying if Noah’s flood only happened 4,000 years ago, which they believe literally happened, then possibly a sea monster survived.

“If it was millions of years ago then that would be ridiculous. That’s their logic. It’s a common thing among creationists to believe in sea monsters.””